First of all, I'd like to apologize as it's come to my attention that my Email
RSS feed has been coming out in a jumbled mess.  I am trying my best to
fix this.  It's been a bit tough since Google has no support for Feedburner.
Please stick with me a bit longer. 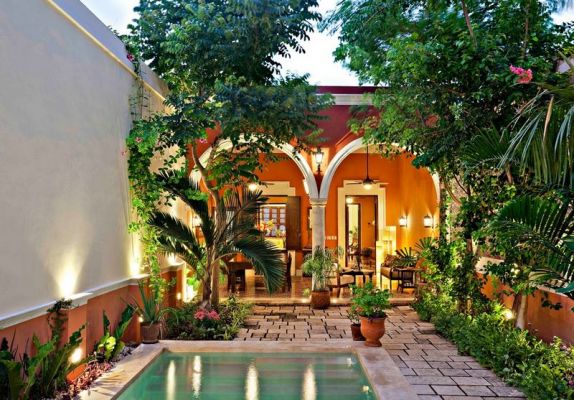 One of my favorite shows is House Hunters International on HGTV.  This is
because it combines two of my favorite favorite past times:  travel and
design.  In December, HGTV aired an episode in Merida, Mexico which
is on the Yucatan peninsula (opposite side of Cancun.)  I'd never heard
really heard of Merida before.  It's actually a city of about 1 million people.
However, what makes it uniqe is it's old colonial center of town and the
fact that it is only 30 minutes from the beach.  On the outside, these
homes look "poor and run down", but expats have been moving there
and taking these neglected and run down colonial homes and renovating
them.  The result is astounding.  My jaw literally dropped seeing the inside
of some of these renovated homes.  It actually has inspired my significant
other and I to plan an Easter trip to Merida to seriously consider buying
property there.  As it's our first time to Merida, of course we have to
evaulate if we like it first.
This home is a gorgous home that has been renovated.
The plants and landscaping is also outstanding. 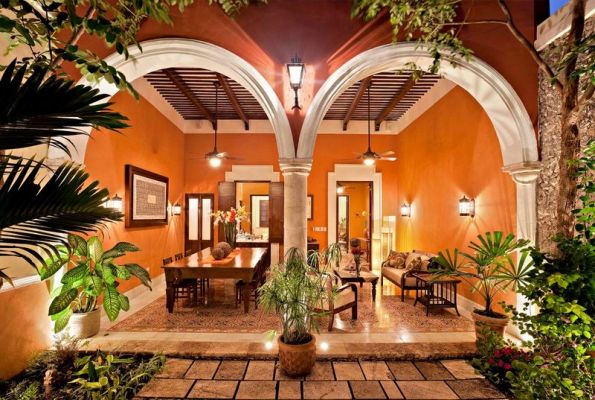 Because Merida has tropical weather, it's very
much so indoor and outdoor living at it's finest.
My parents are from Malaysia so I know very
well what the weather is like and the fact that
most homes are not "air tight" like our homes in
the states are.  But my parents certainly did not
have a home they grew up in like this! 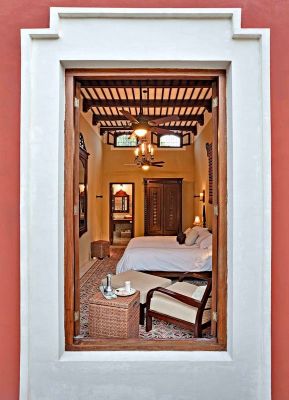 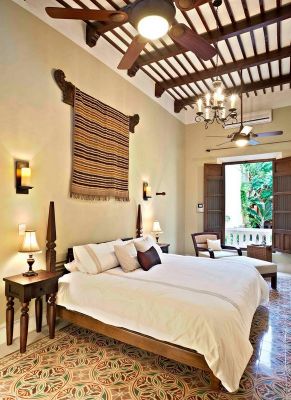 The colonial homes in Merida very typically have
18-20 feet ceilings.  The expats have carried
over the concept of open living to create large
and spacious rooms that are dramatic in their
height alone. 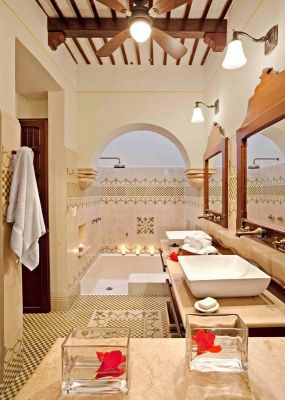 The French and the Spanish brought over their influences
during the colonial era.  From the Spanish also came
Andalusian influences which is why many of the traditional
kitchen designs in Merida look Andalusian in nature.
Andalusia also has heavy Moorish influences in their
architecture - so it seems almost natural to incorporate
moorish elements in their design.  Isn't the bathroom
above fantastic? 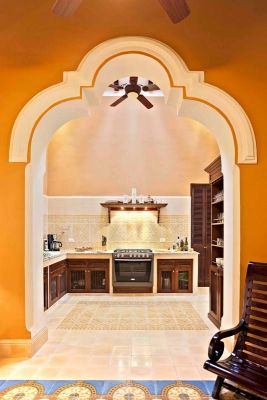 Here is that kitchen I was talking about. The kitchen follows the lines of traditional kitchens in
Merida yet incorporates modern finishes and pasta
tiles (you can see on the back splash) that are hand
made in the Yucatan. 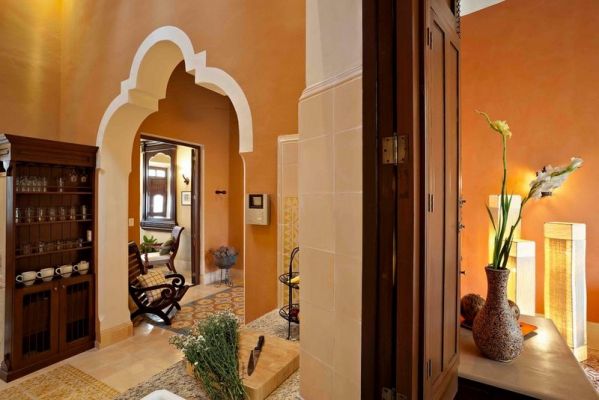 You can see just a hint of the Moorish influence in the arch. 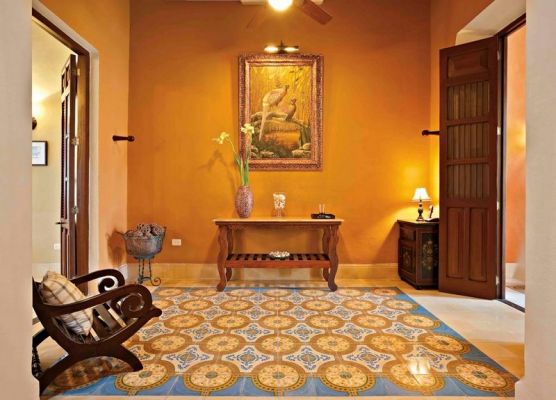 Because the Yucatan peninsual has tropical weather, they don't use
rugs there very much - instead they lay down these fantatsic pasta tiles
in all sorts of patterns to serve as a "rug." 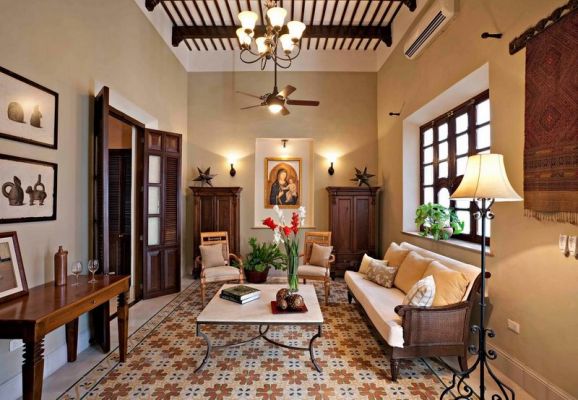 The ceilings and the walls in this living area is very traditional. 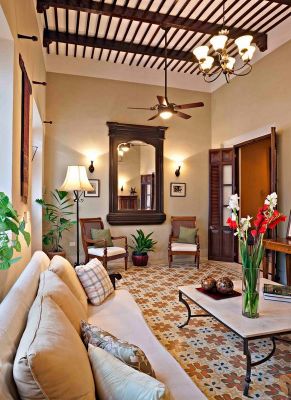 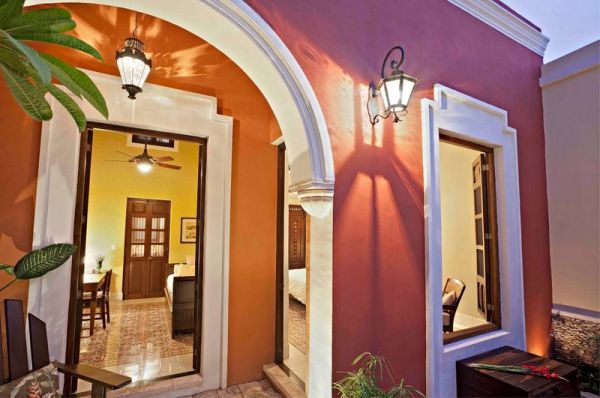 Isn't the paint job fantastic?  Do you notice the high walls to the left in this
photo?  All of the colonial homes have very high walls so even though the
living space is so open, there is no concern about privacy unless you live
next to a building even higher than yours ^_^ 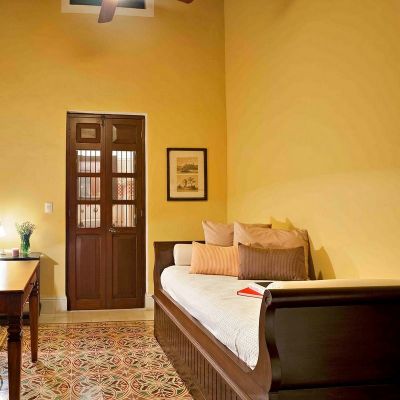 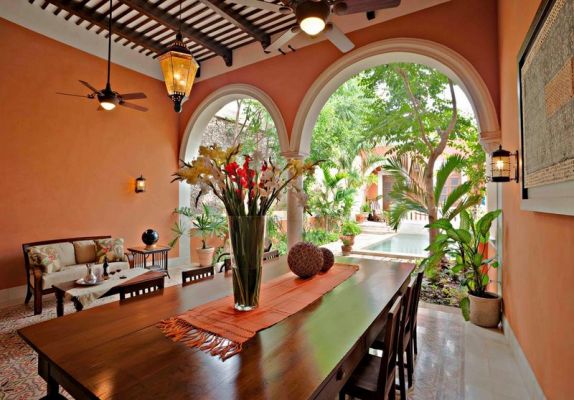 I'm totally drooling over this long wooden table and view.
What a place this would be to live in!
Hope you enjoyed feasting your eyes on this home as
much as I did.  I'll be showing more homes in Merida
later on.
If any of you are interested, a reputable real estate agency
in Merida is Mexico International.  Eric Partney is an agent
there who is very knowledgable (and was the real estate
agent in the House Hunters International episode.)
at 12:10 AM
Newer Post Older Post Home